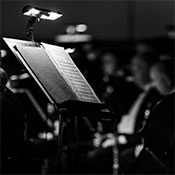 As the finishing touches are happening with Princess and the Pea and we near the release day (Wednesday), I thought I would share a little background on the project and how it came together. The project started no different than any other: I sit at the keyboard and stare at the keys waiting to see if anything will happen.

Gladly something did come to mind and I began writing the music that would make up Princess and the Pea. Here is where it starts to get fun (at least for me). What would the production of the pieces sound like? Would this be a richly cohesive project or just bits and pieces? Sometimes you can answer these questions, but many times you don't because you never want to box yourself in when it comes to creativity. This time the box was the right answer. I made some hard decisions on the project early to force my hand at the way I approached the tracks.

For starters, and most importantly, all of the music would rely on "samples" of real instruments. There would not be one synthetic sound on the album. Yep, the guy who is so involved in electronica would not play any synths on this album. For the uninitiated this means that every sound you hear on these recordings will have been played, sung, spoken, hit, banged, massaged, blown, stroked, etc. by a real living breathing person at some point. To make it interesting there ARE also samples of animals and atmospheres which make up the balance. This is not to say there is anything wrong with using synthesizers. It was just not what this album was calling for.

Every sound was first played by someone else. That is really big when I think about it. Now before you start thinking anything...all of the music was composed by me. There are no pre-fabbed/pre-recorded sections, runs, or passages of music. All of it is original (well, that is debatable for different reasons but you get the point, I did it). Even parts that sound synthetic are not (*see Footnote). I HAVE made use of filters and modulators to get various effects and sounds, but every sound had an organic start.

If you are at all familiar with my other music you will note a huge difference in the agressiveness of the performance. I wanted a softer, gentler sound for this and no doubt you will find this to be the case.

More than anything I hope you find this music personally inspiring. Cya Wednesday!

(*Footnote- There are some aspects on this album that will sound synthetic or as if I created them using a synthesizer, for example the end of Element of Life. These aspects were all samples that have been tweaked to get my desired sound for that particular musical piece. There are no synthesizers on this album.)